Problems on a Microscopic Scale

An SSD arrived at the lab with a problem serious enough to render it inoperable. After running some diagnostics using software it soon became apparent there was more than just a firmware issue..

The SSD in question, an Intel 530 series mSATA device. Intel have been a little sneaky here, the CPU is branded as ‘Intel’ but it is actually a Sandforce CPU in disguise (Triggering Safe Mode on the SSD displayed the actual CPU revision).

Straight away, the chances of recovery are low, and a NAND analysis would be useless as the Sandforce series CPU’s all use 256-AES hardware encryption – seriously secure storage. Due to this, the only viable recovery method would be to repair the SSD and attempt to extract data. 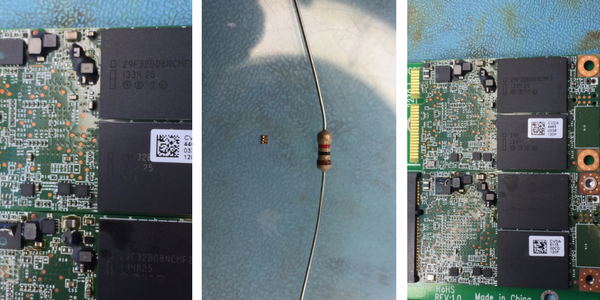 An inspection using our high-powered microscope showed there was a damaged SMD component located in the power circuit of the SSD. This tiny component is responsible for driving the power MOSFETs (aka Gate Driver). The gate driver controls the switching frequency of the MOSFETs to give a nice smooth voltage output to the NAND IC’s on the SSD. To confirm this, after probing the VCC filter capacitors next to the NAND IC’s, there was ZERO voltage present – the CPU & Cache WERE receiving voltage.

Due to the drive being damaged (partly removed from the PCB) the MOSFETs were in ‘standby’ waiting to be triggered. This in turn caused the SSD to revert to ‘Safe Mode’ – this can also be interpreted as a firmware issue.

After finding an identical SSD donor drive – the damaged gate driver was replaced with some nifty micro-soldering. The SSD powered up normally and was able to be imaged successfully without any errors!