Q: My RAID 5 array has been experiencing minor performance problems leading to some data becoming inaccessible. I don’t want to poke around and potentially make it worse. Should I format everything?

When suffering data loss or inaccessible data on RAID arrays, it is critical that you shut down the array as soon as possible as further use can often lead to problem becoming more severe and more data being lost.

If you contact our specialist RAID 5 recovery team, they will be happy to diagnose the problem, and they will be able to resolve it quickly and effectively in the vast majority of instances.

Asked by Sandra in London

Back to: Data Recovery Q&A 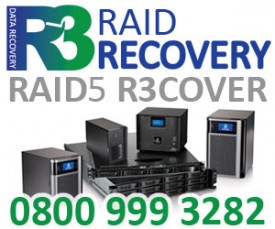 Q: How to I define a “RAID 5” volume ?
A: “RAID 5” volume is created from a “Redundant Array of Inexpensive (or Independent) Discs” that have been established in a Level 5, or striped with parityRAID configuration. A RAID 5 volume is a combination of hard disk drives that are configured for data to be written across three  or more drives, Examples are Buffalo Terrastation 5 Drives, and Dell MD1000 with upto 15 Drives.

Q: What is “parity” or “parity data”?
A: Astorage array in a  RAID 5 configuration uses part of the storage area to write additional data to the disc which should allow the volume to be rebuilt in the event that a single drive and in larger arrays multiple drives fail. In the event that a single drive does fail, the volume continues to operate in a “degraded” state (no fault tolerance).  Some systems allow for the hot swapping of the failed drive. Once the failed drive is replaced with a new hard drive (of the same or higher capacity), the “parity data” is used to rebuild the contents of the failed drive on the new one.

Q: What are the differences between “hardware” and “software” RAID 5 configurations?
A: With a software-based RAID 5 volume, the hard disk drives use a standard drive contoller and a software utility provides the management of the drives in the volume. A RAID 5 volume that relies on hardware for management will have a physical controller (commonly built into the motherboard, but it can also be a stand-alone RAID Card such as an Adaptec or Perc5i card). The RAID  controller provides for the reading and writing of data across the all the hard drives in the volume.

Q: What are the key advantages of RAID 5 volumes?
A:  Redundancy – and Data Transfer speed  – A RAID 5 volume provides faster data access and fault tolerance, or protection against one of the drives failing during use. With a RAID 5 disk volume, information is striped (or written) across all of the drives in the array along with parity data. If one of the hard drives in the array becomes corrupted, drops out of a ready state or otherwise fails, the remaining hard drives will continue to operate as a striped volume with no parity and with no loss of data. The failed drive can be replaced in the array with one of equal or larger capacity, and the data it contained will be automatically rebuilt using the parity data contained on the other drives. Establishing a RAID 5 volume requires 3 disk drives as a minimum requirement.

Q: What are the disadvantages of RAID 5 configurations?
A: There are several disadvantages. RAID 5 results in the loss of storage capacity equivalent to the capacity of one hard drive from the volume. For example, three 2TB hard drives added together comprise 6TB  of storage. If the three 2TB drives were established as a RAID 0 (striped) configuration, total data storage would equal 6TB capacity . If these same three drives are configured as a RAID 5 volume (striped with parity), the usable data storage capacity would be 4TB and not 6TB, since 2TB (the equivalent of one drives’ capacity) would be utilized for parity. In addition, if two or more drives fail or become corrupted at the same time, all data on the volume would be inaccessible.

Q: Can data be recovered from a re-formatted RAID 5 volume?
A: Many times information is still recoverable, depending on how the drives were re-formatted. Re-formatting a volume using Windows, for example, will create what will appear to be a new “clean” volume – but the original data will still be on the disk in the “free and available” space. However, a low-level format (usually performed through an on-board RAID controller utility) will “wipe” or overwrite every single block on a drive. Unlike an O/S (or “high-level”) format, a low-level format normally is slower, takes a considerable amount of time and destroys the original data.

Q: Can I run recovery software utilities to recover my RAID volume data?
A: The safest approach to data recovery with a RAID volume (or with any media) is to capture every storage block on each device individually. The resulting drive “images” are then used to help rebuild the original array structure and recover the necessary files and folders. This approach limits continued interaction with the media and helps to preserve the integrity of the original device. One of the dangers in using data recovery software is that it forces the read / write heads to travel repeatedly over areas of the original media which, if physically damaged, could become further damaged and possibly unrecoverable.

Q: Should I run software to rebuild a RAID 5 volume ?
A: If only one drive fails in a RAID 5 configuration, the volume still operates – but in a degraded state, parity information is not written and a subsequent drive failure will cause the volume to be inaccessible. The important data should be backed up immediately on a RAID 5 drive failure and verified to be usable before any rebuild operation is started. When it comes to recovering critical data, anything that is used to read or write to the original volume represents a risk to the parity information and the integrity of the data itself. Check your hardware is operating properly, check logs to see if there has been any issues accesing data or operation of databases? Are all other drives in the volume functioning correctly? If the data is critical and you are not sure when a drive failed in the array get advice. Call 0800 999 3282

Q: If multiple drives fail in a RAID volume all at once, is the data still recoverable?
A: In most cases yes. It usually requires that data be recovered from each failed hard drive individually before attempting to address the rest of the volume. The quality and integrity of the data recovered will depend on the extent of the damage incurred to each failed storage device. For ths reason large scale arrays with many drives and many terabytes of data require data recovery labs and technicians experienced with RAID Recovery, often recovering data quicker and more completely  than it can be restored from backup tapes or the cloud.

Call Andy Butler to get your RAID Array or Server recovered quickly and safely.